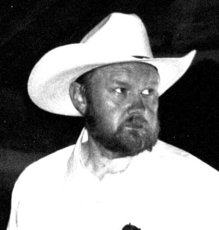 How it all started

A father bought his 6 year old son the magazine” Roy Roger and Trigger”. The magazine was about a cowboy

and his horse. From that day the boy dreamed about cowboys and horses

.As he got older he started reading the real story of the Wild West. At the age of 14 he bought his first S-8 motion picture camera, and directed his own Westerns with his friends in the leading roles. After a visit to the great western-theme park; High Chaparral in Sweden in 1982, he and some friends directed another new amateur Western “Wanted Kid Wayne”.

In 1988 he went back to High Chaparral and worked one season as a Stagecoach driver.

But it was first in 1990 when he, Kjell Nilsen and his family had bought a house out in the woods the year before it really started.

The place was named Pine Valley Ranch. They wanted to host a party for family and friends the following summer, and it become a “western-themed party”. They called it The Pine Valley Bar-B-Q & Stampede. The party was a great success and with cowboy food, plus roping, horseshoe pitching and barrel riding competitions and much more. Little did they know that a great tradition was born from that day on.

A new and bigger party was held the next year. One of the guests who worked at a large shopping mall approached Kjell and asked if he could take it upon him to hold a Western-Themed event at the Mall.

The mall wanted to serve his cowboy food as well. The serve the cowboy food as authentically as possible, Kjell built his legendary chuck wagon, the “Travellin’ Broken Spoke”.

Horses was borrowed, and friends form WRAN (Western Riders Association of Norway) came and held western riding demonstrations, a new thing in Norway at that time. Roping-a-Foot was also demonstrated and taught. It was a success. 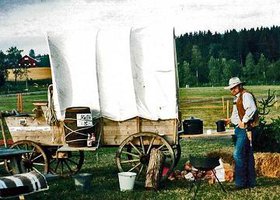 Kjell and Broken Spoke at WRAN-Ranch in 1995

The success with WRAN develops

Late in 1994 Kjell was asked to make WRAN a “ranch” in a big western-themed event at Hellerødsletta outside Oslo in august 1995. He was appointed the project leader, and his word was law. The ranch was made mobile and assembled at Hellerødsletta, with lots of horses, cattle, chuck wagon and WRAN members as ranch hands. It was a new and even greater success. For his effort he got the first award buckle from WRAN for “job well done”.

The next year the WRAN Ranch was used once more.

This time at the national horse show event “Hest 96” in Oslo.

Later that fall the bunkhouse from the ranch was barrowed to a big party for Microsoft in Oslo Spectrum for 1000 attending guests. It was a great party, and Kjell’s son; Bjoernulf demonstrated trick roping.

The rest of the “WRAN Ranch” was found to heavy and to difficult keep reassembling and was destroyed shortly after.

But once again Kjell got and idée!

The “Western Makers, we make your day” was established.

Nothing was too big or too small for the new team.

There where “Western Day’s” to be held at shopping centres and malls, kick off- and cowboy parties for firms, western stunt shows and concerts, and private events. The town was travelling the road from Hamar, Norway in the north too Svinesund, Sweden in the South.

But in 2001, things change. The Nilsens ranch “Pine Valley” in Norway was sold. Kjell bought a new ranch in Sweden, as land was cheaper there, and more space was needed for the activities..